In a world of diapers and toys that are way too loud, the fabulous mommies of today can handle anything...and we do so in heels. 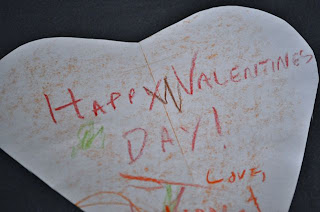 Well, my goal of posting more often has certainly failed. Facebook is just so easy when I have a random thought. Anyway, Happy Valentine's Day! I got this little valentine from my kids this morning (and thanks to my husband who helped!). So sweet. My husband and I have a Valentine's Day routine of watching a movie and eating a fun dessert. Something we figured we could do no matter where we were! I hope you all have a lovely day. And now I will leave you with this little gem from one of the best shows EVER, "30 Rock".
Posted by Sarah at 2:35 PM No comments:

Could it have BEEN any longer since I've posted? To be fair, things have been very busy around here, as we've been on the house hunt (and put in an offer on a short sale - we're waiting to hear back!), a trip to Arkansas for my great-grandfather's 99th birthday, and starting up my photography business. I've lamely tried to have my random thoughts posted on my Facebook page but it's just no excuse for an honest-to-goodness blog entry. It's my goal to post more often, so for those who follow this blog, there will be something to actually read!
So here we are.
As it's the Christmas season, we've had more get-togethers with friends and I'm at our church a lot more for Sunday School Christmas program rehearsals. As a result I have been around a lot of moms...and their complaints. Complaints about no time for themselves, no adult interaction, and no peace. As a mom of two (son I, 3 years and daughter J, 17 months), I know I'm not nearly as busy as mothers of three or more and can't imagine how hectic things can get once kids are in school. I know that many mothers work and have very limited amounts of time to get errands and other "chores" done while I am very fortunate to stay at home and can get things done while the kids are napping and can run out with them during the day.
But you know what? I don't want to hear it.
I don't want to hear your complaints. I'm sorry you're stressed and even as a mother of only two young children, I know that you need time to yourself so you don't get burned out - we all do (yes, me too!). But I'm done with it. Perhaps I'm being a bit rash in that I know different families have different needs and there are very different situations. I know a rested happy mommy is a good mommy and yes, moms deserve time to do things they want (dads do too!) so just do it and be done with it. I'm just so tired of hearing moms talk about how they're so busy with their kids and have no time to themselves. That they've "lost their identity" and that they don't "know who they are anymore". Sorry if that all sounds mean or just super bitchy, but if I hear one more mother complain about having no time to do what they want or being with their kids all week by themselves (because, YEAH, I am too), I'm going to lose it. I will give one "bye" - my friend C. who has six kids. That lady gets a medal and a lifetime free pass to a spa.
Please note: this rant is only in response to complaints I've heard from mothers in my various circles of life and I promise - all are in situations in which there is a very loving father/husband involved who is able and willing to give these moms a break. This post is purely for entertainment purposes. I know that there are situations in which mothers become depressed or even threats to their children's safety as well as their own because of feeling overwhelmed, stretched too thin, and/or have a husband/extended family who is not willing to help out. I hope that any woman in this situation can find the help she needs to keep herself and her children safe.
Posted by Sarah at 7:28 PM No comments:

To feed or not to feed...publicly

First off, apologies. This is my first post in a very long time. I have been so distracted lately that I've been neglecting this blog but I have so many thoughts/rants going through my head that I've definitely needed to write them down. The first is one that has been a sort of "hot button" topic for a while and probably will be for some time.
Breastfeeding in public.
Now I know that 44 states have laws with language allowing women to breastfeed in public (http://www.ncsl.org/default.aspx?tabid=14389) and in California, for instance, women are allowed to breastfeed in public whether they are covered up or not. As a mother of two who was fortunate enough to be able to breastfeed her children, I think that this is fantastic. In the past 30 or so years, there has been a return to breastfeeding and doing things as naturally as possible for your children. And as we all know, prior to formula being invented, women breastfed their children for thousands of years. It's the way our bodies were created - to carry, then nurture, and feed our children. So. Why the animosity towards breastfeeding in public? I can understand in 1800 when it was indecent to show your ankles, that a woman would feed her baby in the privacy of her own home or tucked away in private.
However. It is 2010. Boobs are everywhere. Maybe it's that people are uncomfortable with seeing a whole breast, nipple and all, all of a sudden. But still. This is a BABY. A baby needs to eat and a mother is the source of that baby's food. Why not allow a mother to feed her child when he/she needs it? Nursing a child is not a sexual use of a boob - believe me. Is it really that wrong and offensive to nurse a child in public? I think it's amazing that in our world today where so much is tolerated and a person is considered "close minded" if they don't agree with a certain lifestyle or religion that seeing a woman simply nursing her child could cause so much raucous. I found an article about a woman in Michigan nearly being ARRESTED because she was nursing her baby in a Target (http://hellobeautiful.com/special-features/jeanene-james/woman-almost-gets-arrested-for-breastfeeding-in-target/). There is a video about the story too. All I can say is that opponents of public breastfeeders had better stay out of their local Babies-R-Us stores - there are tons of women walking around feeding their babies and they would probably join forces and gang up on any opposition.
Now, a question I have is this: even though we have a legal right to nurse in public, would people really be so up in arms if the breastfeeding mother was covered up? I have a nursing cover which I use whenever I'm in public or around family or friends who I want to be modest in front of (I know my sister who doesn't have kids appreciates it!). I've seen other women at stores or restaurants doing the same. I have, though, seen women just "whip it out" and begin nursing their children. Sidenote: I don't have a problem with this, but I know that before I had kids, I was a little anxious about it (not a PROBLEM - just anxious). I was a bit anxious because I was afraid that the woman might be embarrassed if her breast was suddenly exposed when putting baby on and off. Recently we were at a museum and there was a woman sitting on a bench feeding her baby and she wasn't covered. When the baby was done, she was laying the baby down in the stroller and messing with blankets and such but her boob was still hanging out. Some teenage boys were just watching at her, not saying anything, and the woman looked up, realized they were looking at her naked boob and snapped at them, something to the effect of "you're such perverts...wait until you have a kid of your own". Could she really blame the boys? They're young and hormonal and this was a real live boob out for all to see. All I'm saying is that if she had a cover, all of that could have been avoided. I know that when I would see a woman nursing in public with a cover, I never got anxious as I knew I wouldn't get a "show"...
Anyway, could all of this craziness with harassing breastfeeding mothers be avoided if women were covered up? Not that nursing without one is wrong, but could it? I know some people are just very modest and don't want to see someone's boob, no matter what, just because of that modesty and I think that that should be respected. Note that these people don't have a problem with a breastfeeding mother nursing in public, they just don't want to see boobs. Now I'm not telling anyone what to do, of course, but perhaps just being a little more discreet, whether by using a nursing cover or just by not letting your boob hang out ten minutes past when baby is done feeding, there might not be such an uproar about it all. But whether we're discreet or not, the bottom line is that breastfeeding anywhere is a right a mother has for her child she should never be told she can't do it.
Posted by Sarah at 2:21 PM No comments: 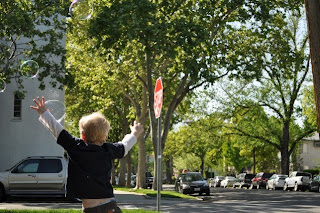 I hate sticky messes but we had such a beautiful day last week that I put away my hang-ups and we sat outside and blew bubbles. We had bubble solution everywhere but seeing my son run around chasing bubbles and laughing those great belly laughs was the best.
Posted by Sarah at 2:47 PM No comments: 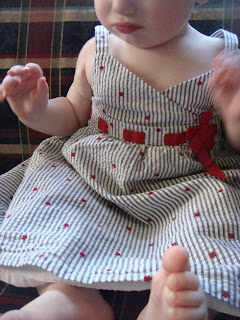 I got this dress on super sale at Janie & Jack when my daughter was about three weeks old. I have been dying for her to wear it and she's finally big enough. I love that store - check out the sales rack and you can find some high quality clothes for the same price as Target clothes (which I also adore).
Posted by Sarah at 2:43 PM No comments: 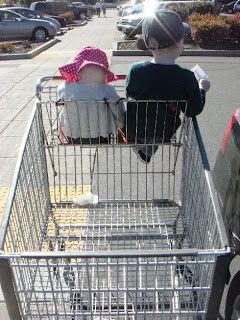 Right now the budget is tight so we don't get to go crazy at Costco, but we buy our milk, eggs, cheese, Cheerios, tortillas, diapers and wipes there. We save a fortune on this stuff, especially the milk and cheese seeing as we go through it in no time. The best part of it? Their giant carts hold two kids up on top which allows me to do my shopping there without having to put all my groceries on the bottom only to have them roll out.
Posted by Sarah at 2:37 PM No comments: 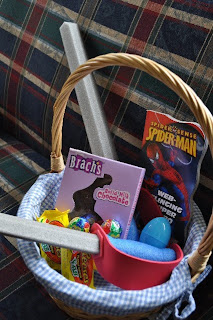 Nothing says "Easter" like foam swords. And yes, there are two because one is for my husband...
Posted by Sarah at 3:43 PM No comments: